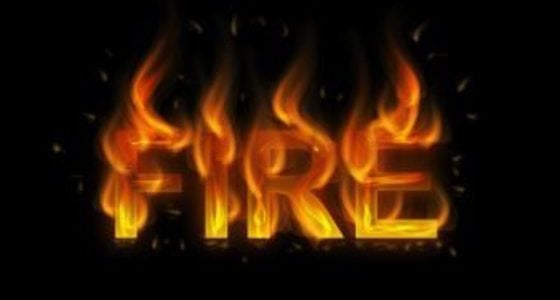 The other day was another testimony to God’s favor on my life. Some men came to install our new air conditioner after our old one clunked out after 18 years.

Everything was going fine until one of the men ran upstairs hollering and asking if we had a fire extinguisher. He had a torch that malfunctioned as he was working on copper piping. We ran downstairs to see a torch that was spewing flames nonstop. Panic set in when we realized no one had a fire extinguisher! He threw salt, baking soda, and then as a last resort, water on it as the flames pronounced we are here to stay. It was not until William came running downstairs with our neighbor who quickly doused the fire with the spray of a fire extinguisher, that we were able to sigh with relief.

Over sixty years and not once did we or any family members have an incident with fire—talk about favor. Thus, smoke alarms, yes; but a fire extinguisher, no. Now I am telling everyone to get one or more fire extinguishers in their home. What an awful feeling to have untamed fire in your home without one.

I had cried out to God during the event knowing that only He could help us. Again, by His grace and favor, He kept the fire contained so that there was little damage. The major problem was the smoke that penetrated downstairs. If you could see all the combustible boxes stored in that room that could have gone up in flames, you would agree it was only the favor of God that kept the flames in one spot.

With the flame out and the torch taken out side, we turned our attention to one of the men who burned his hand. William and I did the best medical job we could until he could get to the hospital or a doctor.

The best thing of the evening was that we were able, by God’s favor, to be a testimony to the men who were surprised by our response to a frightening event. It opened the door for me to be able to give them a tract and tell them it is because we know Jesus as our Savior and we hoped they knew Him too. I asked them to please read the tracts. They accepted them and said, “thank you.” William’s attention to the man’s hand was a strong testimony indeed—not being a furious man who was angry that his house could have burned down.

Now the smoke damage is cleaned up and our new air conditioner is installed. Now we can sit back and chill. (I know, it wasn’t that funny.) Furthermore, we were able to witness to all those who came to repair and cleanup after the fire. In addition, had we not had the fire and new installers for the air conditioner, we would never had known that the wrong coil had been put in place. Talk about His favor!

Psalm 5:12 (NIV) states, “Surely, LORD, you bless the righteous; you surround them with Your favor as with a shield.”

Rarely would you combine fire and favor together. Yet, that day and always, our Lord has surrounded us with His favor as with a shield. I bless His Holy Name!