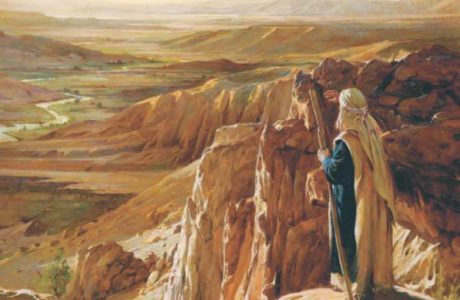 When you read Numbers, Chapters 13 and 14, along with Joshua, Chapter 14, you cannot help but glean wisdom from Caleb’s courage. Courage is the strength of purpose that enables one to withstand fear or difficulty.

The Israelites camped at Kadesh-barnea and sent out 12 men to scout out the land of Canaan, the Promised Land. Although Joshua along with Caleb showed great faith in God, I want to focus on Caleb due to his age of 85 when he received what God had promised him. Up to this age, his faith in God did not waiver, and now at age 85, he took steps to possess what he believed God had promised him over 45 years ago.

Joshua 14:7-12 NLT states, “I was forty years old when Moses, the servant of the LORD, sent me from Kadesh-barnea to explore the land of Canaan. I returned and gave an honest report, but my brothers who went with me frightened the people from entering the Promised Land. For my part, I wholeheartedly followed the LORD my God. So that day Moses solemnly promised me, ‘The land of Canaan on which you were just walking will be your grant of land and that of your descendants forever, because you wholeheartedly followed the LORD my God.’ “Now, as you can see, the LORD has kept me alive and well as he promised for all these forty-five years since Moses made this promise—even while Israel wandered in the wilderness. Today I am eighty-five years old. I am as strong now as I was when Moses sent me on that journey, and I can still travel and fight as well as I could then. So give me the hill country that the LORD promised me.”

What wisdom can we glean from Caleb’s courage?

There is so much more I could share from these passages. Ask God to give you the courage to try new things, don’t let the crowd persuade you to doubt God, hold onto faith though facing huge challenges, be aware of apathy and loss of hope, and thrive in life to your last breath.

You too can exemplify Caleb’s courage. Go forth now in Jesus!