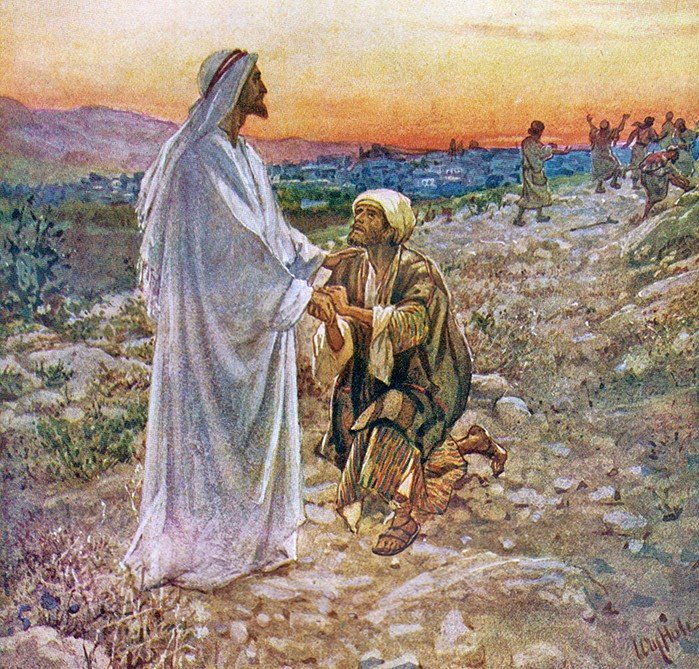 In Luke 17:11-19 an event is shared whereby we can learn some lessons from the ten lepers cited in the passage. It states:

“Now on his way to Jerusalem, Jesus traveled along the border between Samaria and Galilee. As he was going into a village, ten men who had leprosy met him. They stood at a distance and called out in a loud voice, “Jesus, Master, have pity on us!” When he saw them, he said, “Go, show yourselves to the priests.” And as they went, they were cleansed. One of them, when he saw he was healed, came back, praising God in a loud voice. He threw himself at Jesus’ feet and thanked him—and he was a Samaritan. Jesus asked, “Were not all ten cleansed? Where are the other nine? Has no one returned to give praise to God except this foreigner?” Then he said to him, “Rise and go; your faith has made you well.”

From this passage we can learn:

1. People with leprosy were not allowed to enter a village, so they maintained the distance prescribed by Moses (Lev 13:46). Notice that Jesus did not go to them, touch and heal them as he had done with other lepers (5:12–13). Instead, he kept his distance and simply told them to go and show themselves to the priests. The priest had no power to heal them, but he was designated as the one to pronounce them clean. Only as they went in faith were they healed.

Lesson: No matter how desperate your situation, if you step out in faith, you will see how God is able to move in your situation.

2. Jews had no dealings with the Samaritans, and yet in this group a common sickness had broken down the racial and religious barriers. In the common tragedy of their leprosy, they had remembered only that they were sick people who were in need. The need for social, cultural, religious, and racial segregation was gone. Together they shouted with one voice, “Jesus, Master, have pity on us!”

Lesson: As the Body of Christ, we will see the miraculous when we tear down the barriers that can separate us and work together for God’s kingdom purposes.

3. Only one of the ten, a Samaritan, returned to thank Jesus for being healed. In returning, Jesus was able to grant him not just physical healing, such as the other nine received, but also it appears forgiveness, reconciliation, and salvation.

Lesson: Do not rejoice so much in your blessings that you forget to express gratitude to The Blesser.

“Your faith has made you well” suggests a total healing for the one who gratefully returned. In faith, will you obediently go and be counted as number two?