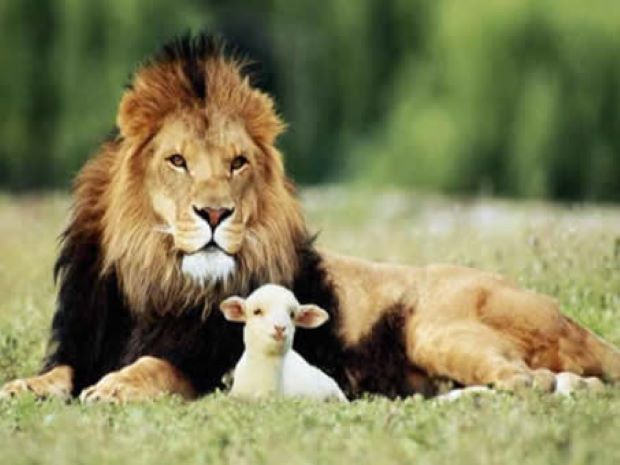 The Lion and The Lamb

March is said to come “in like a lion and out like a lamb.” Truthfully, I cannot believe March is here. How is it that March can be described as both a lion and a lamb? The simplest explanation is that when March begins it’s still officially winter. Then when March ends, it’s officially spring. The month usually opens with cold weather and ends with gentler weather. Yet, this is not always true. March can have unpredictable weather. You might use your heating system one moment and the air conditioning the next.

The Lion and the Lamb combination are also shared in Revelation, Chapter 5:4-6, both referring to Jesus Christ. He is the conquering Lion of the tribe of Judah and the sacrificial Lamb who was slain. Though March may be fickle, our Lord never is. As a matter of fact, He has never had a beginning and will never have an end.

A lion is known as the king of the beast. Jesus, being a descendant of King David, is also a king. He is of the tribe of Judah, being a descendant of David (the King of Judah). Thus, this passage in Revelation reveals Jesus as The Lion of Judah. He is the ultimate King of Kings who will return victorious over all authority in Heaven and on earth.

In addition, John the Baptist saw Jesus approaching and declared, “Behold, the Lamb of God, who takes away the sin of the world!” (John 1:29) This same passage reveals Jesus as the ultimate “Passover Lamb.” As such, He victoriously saves all who believe in Him, giving them eternal life and deliverance from all sin (click here to learn more).

When you read Revelation 5:4-6, you see how John began to weep bitterly because He did not think there was anyone who could open the scroll and read it. Then he was instructed to stop weeping and look, wherein he saw the Lion of Judah and the Lamb who was worthy to open the scroll and its seals.

Is there something that is causing you to weep presently? Have you taken a look at the Lion of Judah who is victorious over all authority seen and unseen? The lion displays Jesus’ power and authority. Have you taken a look at the sacrificial Lamb of God who victoriously conquered the worst problem you could ever have (sin)? The lamb displays Jesus’ humility. What is left for Him to triumph over? What can defeat Him? What can take Him by surprise? What can overpower His control?

Will you too, like John, look to The Lion and The Lamb who is the answer for all challenges that you face? Will you allow Him to bring comfort and deliverance for you? It is for you that He sacrificially died and rose victoriously. It is for you that this King will one day return. Look—do you see Him?